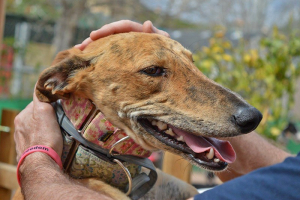 A disease which can ocurr to all canines in Spain. LEISHMANIA.
It is a disease relative to the dogs which read as a “negative.. as much as those who read positive.”
Leishmania is nothing to be feared ever, its to be understood. In order to treat your leish positive dog. Or your negative read dog.. who can become positive in time. With correct treatment a Leish dog can live a great life. But understaning a dog from a Mediterrean country is imperative to a healthy happy life. So if youre considering adopting either a positive Leish dog… or Negative dog… please read the link and understand what could occur. This is imperative to a happy healthy life.

Leishmaniasis in dogs is a disease caused by the infection of a dog due to the Leishmania infantum parasite and by the response that establishes the dog against this parasitic infection. This parasite is widely distributed throughout the Mediterranean basin, but needs a particular insect, which in Spain is the mosquito Phlebotomus perniciosus, sting an infected dog and then a healthy one so it can spread among the population. Once infected, the dog’s immune system detects the presence of the parasite in its blood cells, and begins to establish attack measures to destroy it. The dog can do this by making antibodies, a type of protein capable of detecting the parasite, or by forming special cells that will directly engulf the infected cells and the parasite inside. The first system, the antibody, fails to eliminate the parasite, so that the infection progresses, and the dog goes on and on making antibodies trying to defeat it. Paradoxically, it is these antibodies manufactured that fail to destroy the parasite, which will cause much of the problems that the dog will suffer. However, if the dog manages to organize a good army of killer cells, the infection will either be kept at bay or even eliminated.

This disease can also be suffered by people. It’s call a zoonosis. In this we speak of leishmaniasis. The difference is that healthy humans use the cell defense system more efficiently and can end the infection quickly. People with immune system problems, whether congenital, as a result of other debilitating diseases, or medications given for other diseases, may not have such an effective defense system and end up developing the disease.

One of the most frequently asked questions to veterinarians is whether leishmaniasis is spread from dog to dog. In this respect, it is important not to forget that direct infection between dogs, or between dogs and people is almost impossible, because the parasite must spend part of its life cycle inside the insect that transmits it, to experience a series Of changes that allow him to infect a new dog or a person. Hence the fight against these insects is one of the most important battles in the spread of this disease.

In rare cases, a mother can be infected with a puppy during pregnancy, and also between dogs due to blood transfusions.
Since it is a disease that depends on special climatic conditions (the insect that transmits it has to complete its cycle), it is difficult to find it in very high areas or in very cold climates. Anyway, the increase of the global temperature can favor the expansion of the area in which it is endemic.

It is likely that dogs originating in the Mediterranean basin, having several generations exposed to this disease, have a greater tendency to respond adequately to infection than breeds from other geographical areas. It is estimated that approximately 70% of dogs in endemic areas have been infected at some point, although more than half of them have not developed the disease. Only 10-15% of dogs end up suffering from the disease because their immune system opts for the least appropriate defense mechanism to fight the infection.

Symptoms of leishmaniasis in dogs

Antibody fighting is the least effective, and it causes the most problems and symptoms in infected and diseased dogs. The most common symptoms are skin lesions, some with a characteristic distribution around the eyes or atrial pavilions, but they can appear anywhere on the body. In addition, affected dogs often suffer from problems in the kidneys, which are unable to effectively eliminate that large arsenal of antibodies generated without success. On the other hand, these antibodies, when they accumulate in the blood vessels, can cause symptomatologies. One of the most typical is bleeding from the nose. But they can also build up in the joints and cause arthritis to the dog.

If your dog is suspected of having leishmaniasis, the veterinarian will perform blood tests to see if he has had contact with the parasite, and what kind of response he is generating. The tests (of immediate character), usually to know if there has been contact or not with the parasite, although they do not provide data on the type of response of your dog. If it is positive, it must be confirmed by sending your dog’s blood sample to a reference laboratory, which will measure the level of antibodies in the blood and can determine if there have been any involvement of other vital organs. In some cases, more sophisticated testing is needed, which probes Leishmania DNA into bone marrow or lymph nodes, or performing special biopsy stains.

Treatment of leishmaiosis in dogs

If the disease is confirmed, your dog should receive at least two types of medication intended to combat Leishmania, in addition to those needed in case of involvement of vital organs. The first phase of treatment is more intense and usually lasts a month. It is then extended to a minimum of 6 months with milder medication.

Once affected, your dog will become a chronic sufferer, leading a normal life for the rest of his life, but always with the risk of relapse in the event of other debilitating diseases.

The best way to prevent leishmaniasis in dogs is to combine two or more strategies. The primary strategy is the prevention of sandfly stings through the use of collars, pipettes or sprays with insect repellent substances. Another strategy is to use a vaccine that attempts to target the dog’s immune response towards the use of destructive cells instead of antibodies. Vaccination is estimated to reduce the likelihood of disease by about 4 times. But since it is not a vaccine that provides 100% protection, it must always be associated with the use of repellent substances. An additional strategy is to administer 2 or 3 times a year a drug that stimulates the cell defense system.

Lastly, remember the importance of rapid diagnostic tests that the veterinarian can do before the slightest suspicion of this serious disease. The sooner you diagnose, the better your dog’s treatment responses will be.